Cruise Down the Bore River Part 2 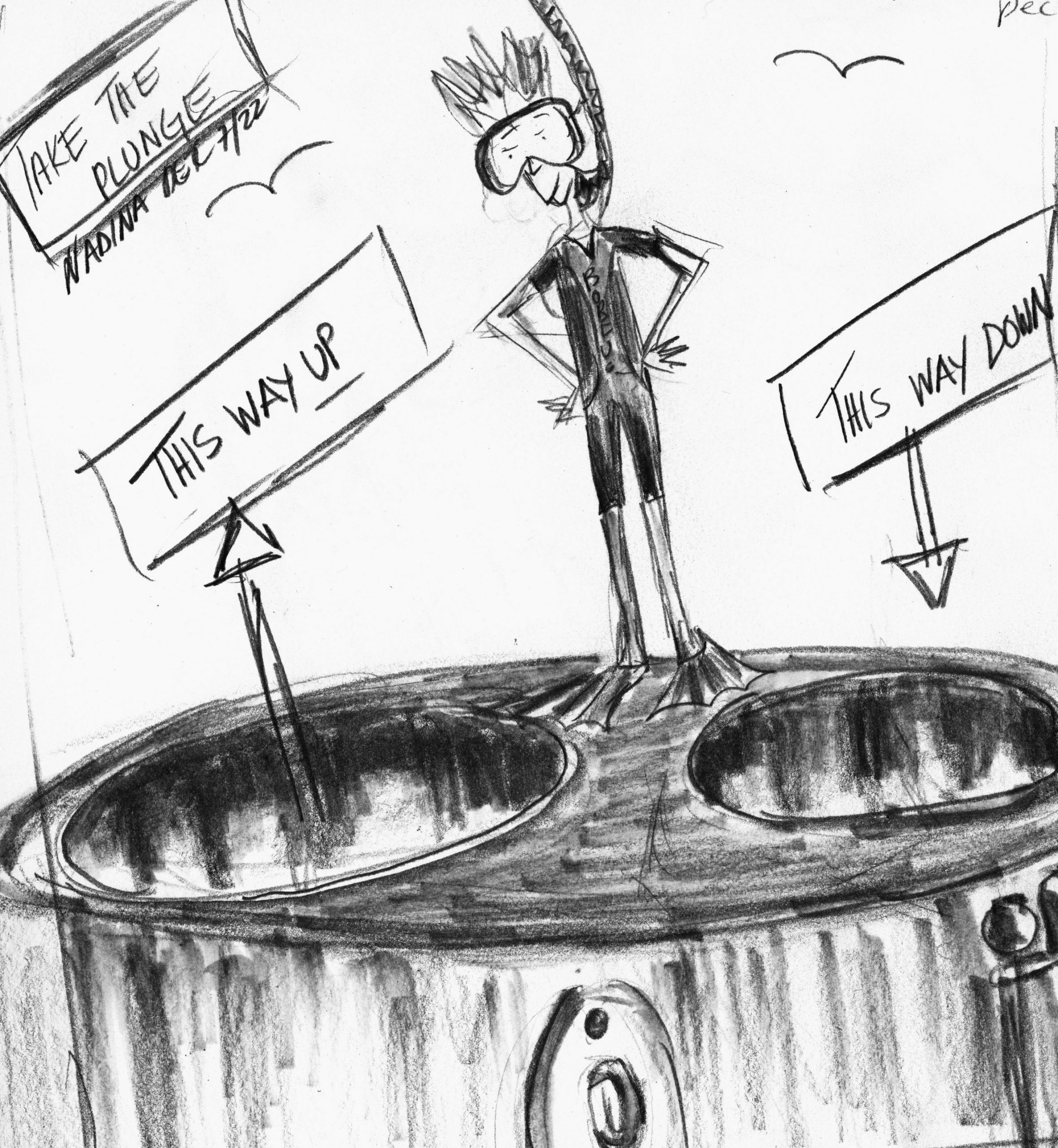 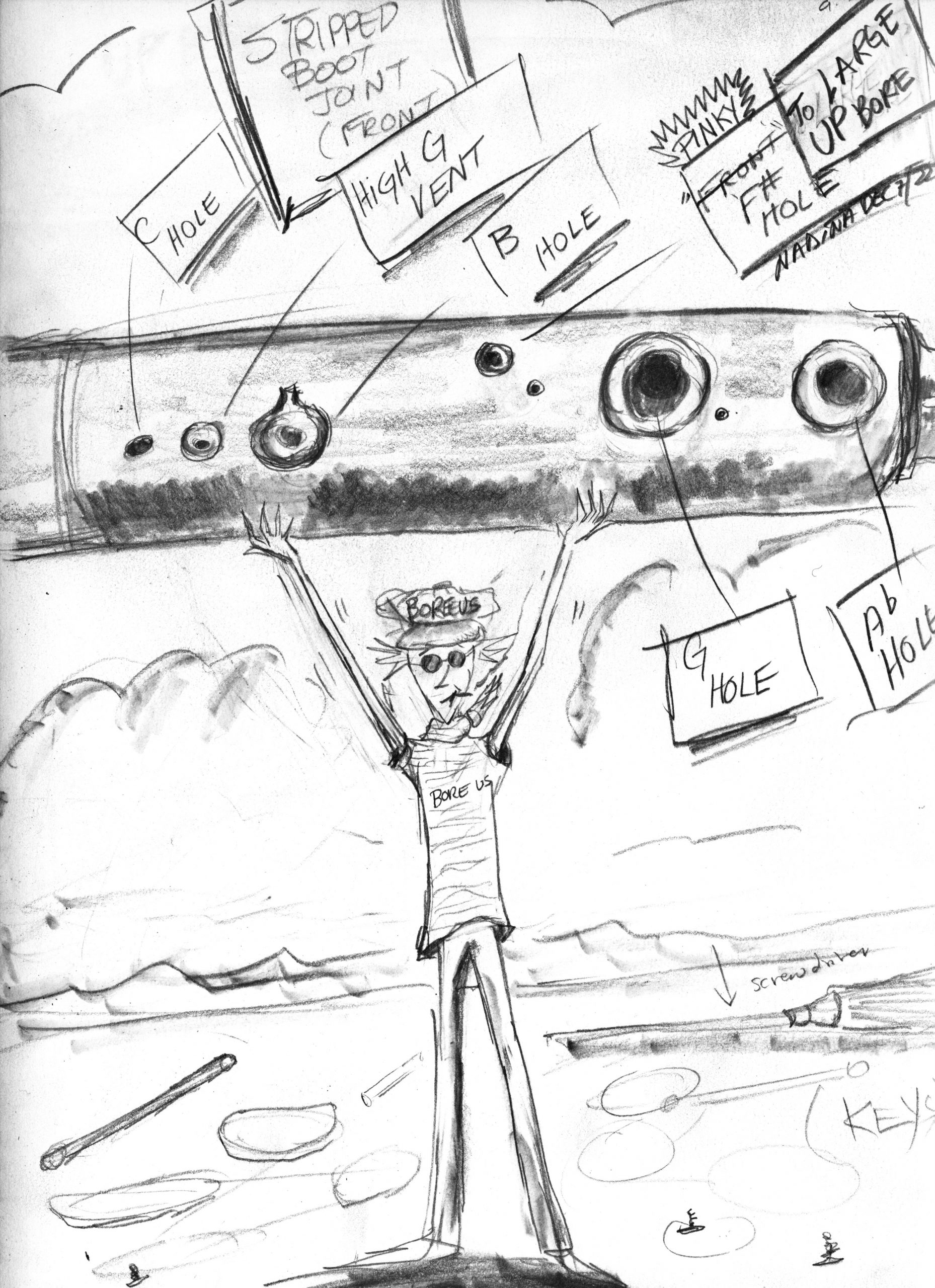 We’re ready to continue our cruise.  You’ll really want to jump into the bore river to experience the boot joint!  We start with the downbore…

C# trill – we’ve passed the tenon connection from the wing and almost immediately we see a small, straight hole. It’s the C# trill, perhaps the most unloved mechanism on the bassoon.  I described in Part 1 the compromises made by the necessary division of the downbore from wing to boot joint. This little hole would work a lot better if it could slant up at an angle and be twice as long.  Unfortunately, the tenon connection makes this impossible, so we are left with a stubby little tone hole that is not particularly happy producing a good half step trill.  It also sits at a very ‘wet’ spot of the bassoon, collecting moisture easily that causes premature hardening of the pad and frequent early rot.

C hole – at almost the same point in the bore as the C# trill, we find ourselves at the effective end of the wing joint – tone hole for C3 [264 hz]. Remember, C4 also lives in this hole, with a whisper key vent open to eliminate the lower fundamental harmonic.  Depending on reeds and bocal, the tuning of the upper octave is a bit mysterious.  Most of us are looking for a C hole that is voiced as a compromise between the two octaves. As you gaze out of this lined tone hole, you might see a slightly flared shape: an absolutely straight tone hole can sometimes make C4 a little hard to get up to pitch; a taper opening to the outside tends to sharpen the C4 a bit more than the fundamental C3.

High G vent – this next exit from the bore is a small hole [usually not lined] and covered by a pad. Its primary responsibility is to allow G4 [392 hz] to really resonate.  How?  By making the G4 sharper and allowing the player to relax a bit.  It’s good not to have to bite the high G, especially as it sits a semitone above F#4 which tends to be high.

B hole – this is the largest tone hole yet. Sizing this hole can be a very individual preference.  It blends best with its neighbor tones if the hole is slightly smaller, because the sonority is a bit darker, but this makes it important to keep some embouchure support so its not low.  [I personally prefer to open it a bit and go for the slightly higher intonation at the expense of a bit brighter sound.]

At this point in our journey, we start to see how the double bored design of the boot creates some misunderstandings about the order of the tone hole exits. We get confused between back and front/down and up!!  It’s natural to assume that the holes on the back side of the joint exit from the larger upbore, but this not how bassoons work. This next tone hole is an enigma.

Bb primary hole – the next hole in the small side of the boot exits on the back side of the bassoon. It is one of 3 holes that make Bb2 [116 hz] and Bb3 [232 hz] playable. Removing the large pad cup over these 3 holes reveals a rather spooky face. There are two smaller holes that vent from the large bore…we’ll locate them soon.  Bb3 is an unhappy note for many bassoonists and it’s obviously had an unhappy history.  Up to 1900s, Heckel and others attempted to stabilize the Bb’s using only two holes, one into each bore.  If you want to understand the challenge, it’s worth plugging up the t wo little Bb vent holes and see what happens to Bb2 and its octave partner.  You’ll appreciate the years of trial-and-error experiments that found this albeit imperfect solution.

It’s worth mentioning that the front Bb also operates using a hole! Obviously not a tone hole, rather a very small diameter hole thru the wood that separates the down bore and the upbore.  It’s the first of 3 or 4 push rods that link the front of the boot to the back.  I suspect the clever people who figured out the front Bb connector would be disappointed to know how infrequently used this mechanism is by so many players…

A primary hole – Notice how the spacing between all these tone holes is increasing? The next stop on our cruise is at the bottom of the small bore. Although the opening is operated by the right ring finger, the placement of the cup on the back of the boot is confusing.  This primary hole for A2 [110 hz]and A3 [220 hz] indeed opens from the down bore.  There are a couple of approaches to the shape of this hole, ranging from round to oval. 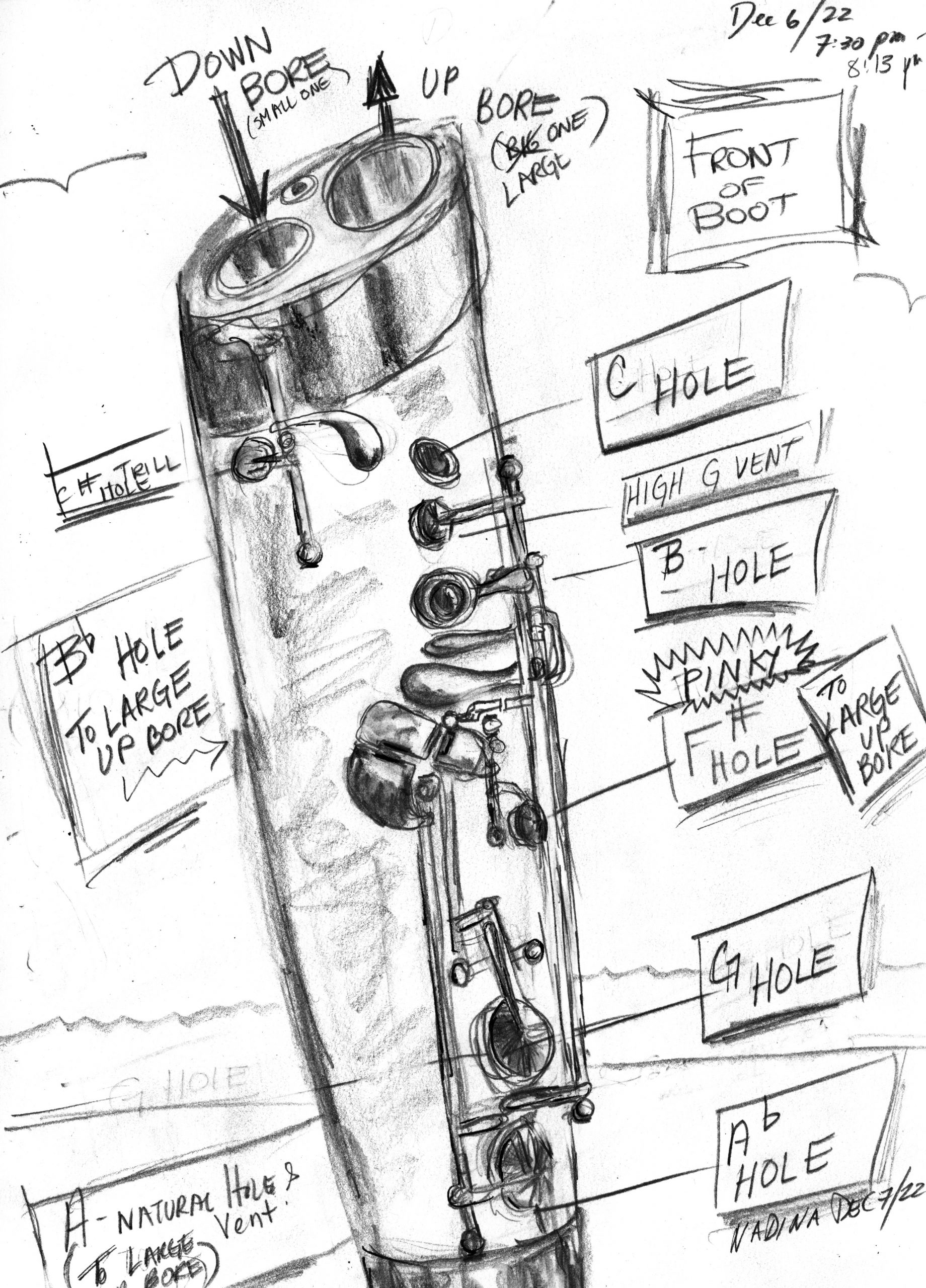 We come now to the big 180 turn…there ought to be a YouTube channel devoted to the UTube!  It’s a difficult challenge to build these correctly, and until very recently the traditional technology of brass tubes soldered to the base plate has been the primary technique.  A few makers are now using more sophisticated CNC cutting to build a UTube that maintains the true conicity/taper of the rest of the bore.  There is a lot of acoustical turbulence in the bore at this big bend, just like a river navigating a sudden change of direction. 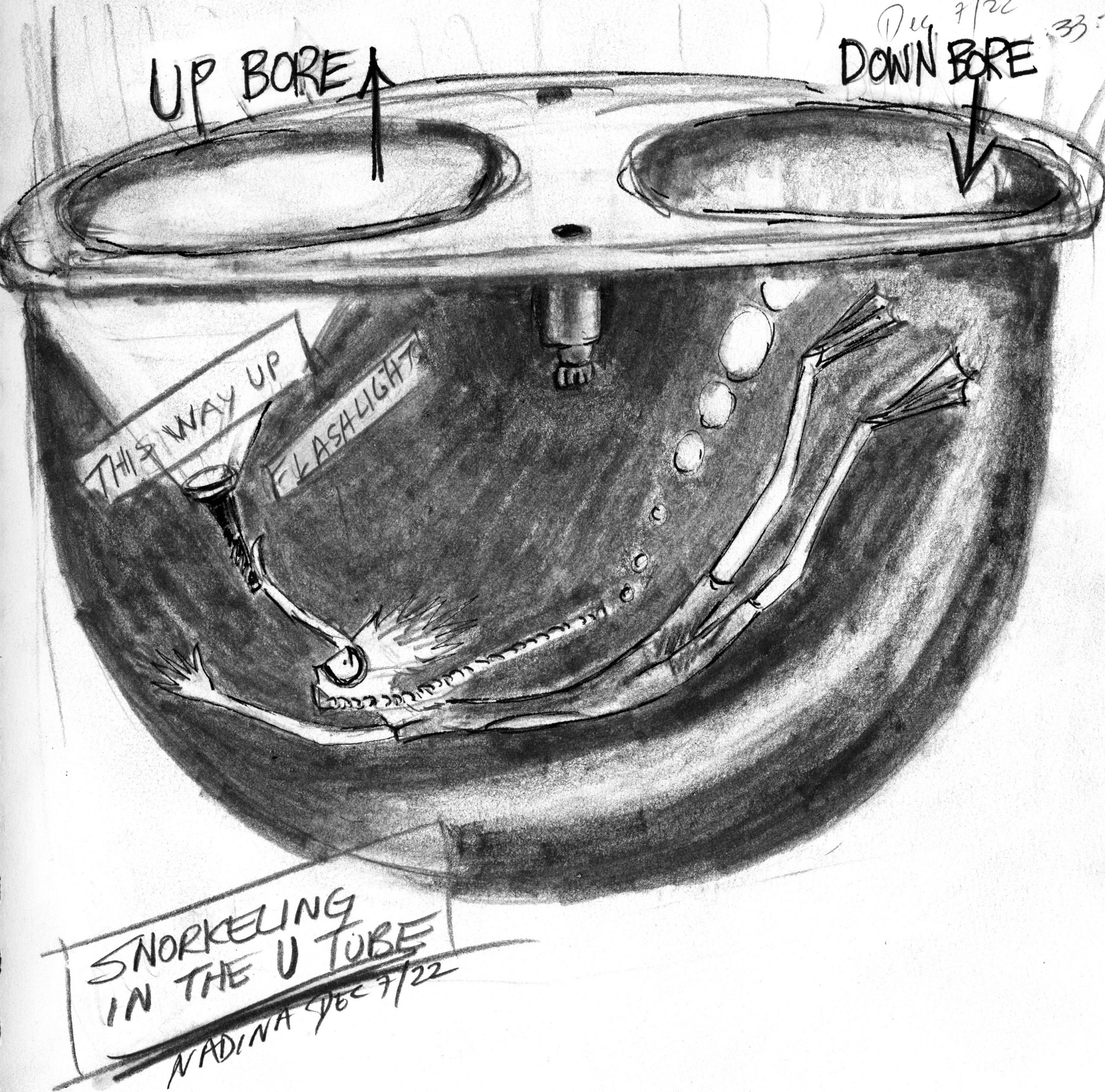 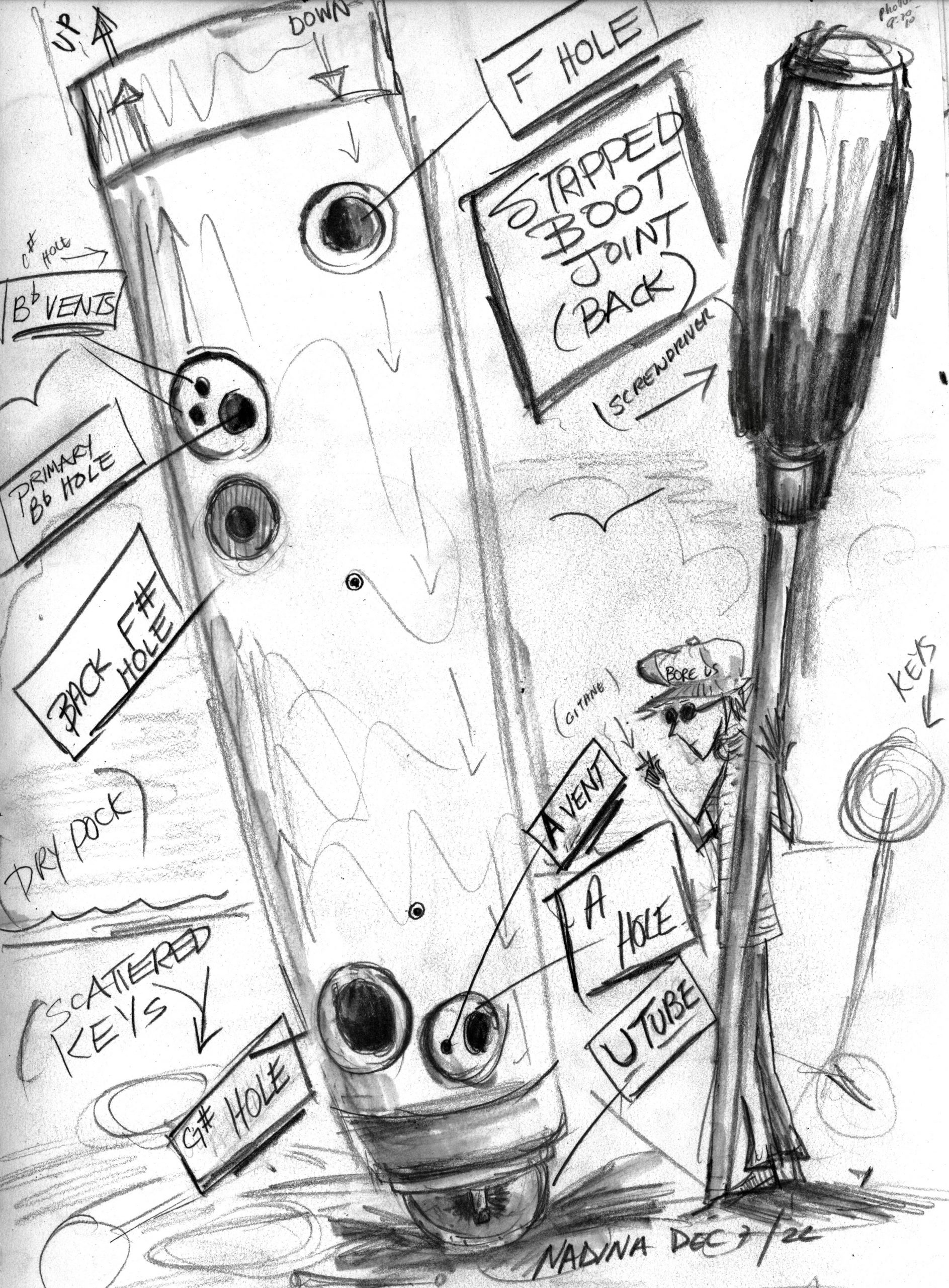 A vent – you’ll hardly have time to catch your breath after the UTube before you locate the first hole in the upbore.  It’s a very small vent that exits on the back of the bassoon right next to the A natural primary tone hole. Why is it here?  Well, if you block it off you will immediately start having arguments with your bassoon on A3.  This little hole alleviates pressure at just the right spot to help attenuate the A2 energy and allow the bassoon to sustain the middle octave A.  Like other tone holes, this little vent can sometimes be a straight hole and sometimes have a flare. As you pass by, make sure there is no debris clogging the exit!!

G# hole – if you have a Renard or an older German bassoon, you’ll immediately come to another hole of a similar size to the Ab, usually only a centimetre further along the upbore. G# tone holes are a relic from earlier Heckel traditions and they work very well. They are not identical to Ab, although many players will voice these instruments to make the tuning match. Most instruments with this tone hole will have a slightly higher pitch on the G#3, which allows for more flexibility on the ‘upside’.

G hole – the holes are getting bigger. Like Ab, this hole for G2 [98 hz] and G3 [196 hz] exits from the large bore to the front of the bassoon. It’s closed by the big cup/pad operated by the right-hand pinky finger F mechanism.  But don’t make the mistake of thinking of this as the low F tone hole; when the big pad cup on the front of the bassoon is open we get sounding G’s.

F# holes – Two tone holes coming up on opposite sides of the large bore. The first is the ‘front’ F#2/F#3 [185 hz] and the next is the ‘back’ F#2/F#3. One is operated by the pinky on the front of the bassoon, the other by the thumb on the back – but they are both on the large upbore side!! If you strip all you keys off the bassoon, you can see right through these holes.  Because the front F# hole appears first, it is a smaller diameter hole than the back F#.  Although the two F# can be easily voiced to have the same pitch, most makers and players utilize the smaller front F# hole as a flatter alternative. The mechanism for the pinky F# works ergonomically well, and in D major where we need a slightly lower major third, the small hole and lower pitch gives us tuning flexibility, especially for F#3.  Often, the front F# is too flat for F#2, though resizing either tube will allow a player to exercise personal choices…

Bb holes – Two more tone holes come next, one after the other and both very small. As described above, these serve as vents to improve Bb2 and Bb3.  Without these holes Bb is a completely uncooperative note.

F hole – we come now to the last stop on the boot joint itinerary, the F2 [86 hz]. Because this sits under the ‘pancake’ right thumb key, most players designate this as the low E. But the tone hole produces an F! When the cup/pad close, the boot joint effectively extends into the long joint, much as the C of the wing extends into the entrance of the boot. 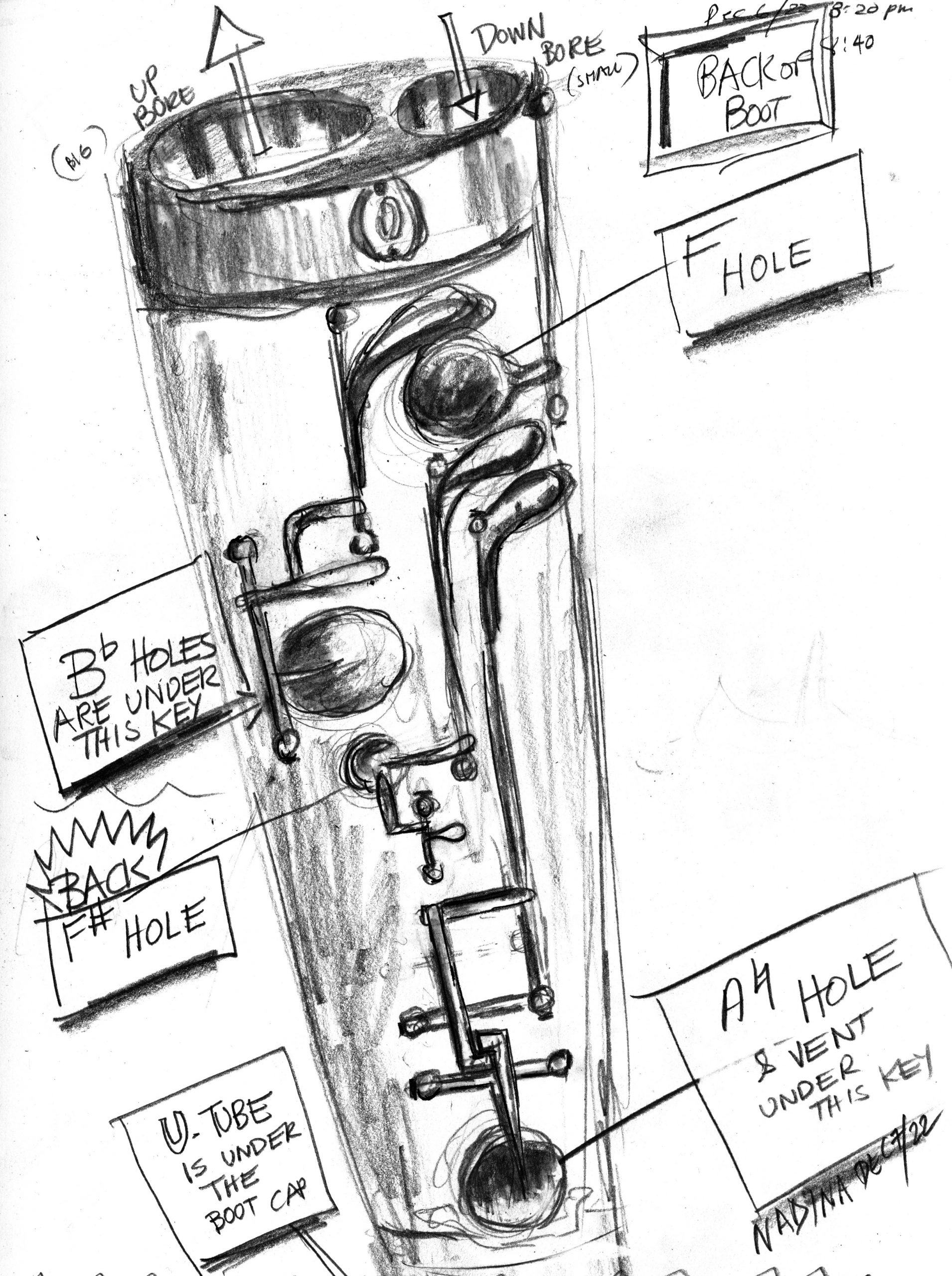 Before we take a break from our bore cruise, it’s worth making an observation about the tone hole exits on the boot joint.  The larger holes are difficult to design and execute because they occupy quite large oval segments of the exterior of the boot.  In particular, the G and F tone holes, and the paired holes for Bb and A – all of which are cut at angles to the perpendicular of the bore – presents non-symmetrical surfaces which make pad/cup geometry very difficult. There are several approaches to the design of these external ‘seatings’: they can be curved [Fox], flat [many makers], have secondary seats made with different cutting tools [many makers] and some utilize soft, round edges for a more generous pad to wood contact.

To make this project more manageable, we decided to use my working sketches which allows me to posit, portion, consider, and sometimes after a few days, alter a rendition. These sketches are done in soft HB2 pencils with some slight additions of black ink and graphic copic markers when further definition is needed. To those who have read thus far, we welcome your drawings if you feel moved to interpret some of the concepts in your own way.