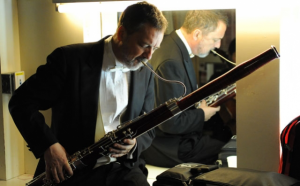 Let’s step back and try to picture what happens when we stick a reed on the end of the bocal.   Obviously, there’s a complex interaction between internal “acoustical information” – the pressure variations in the bassoon bore – and the “pressure-controlled valve” which keeps it all going.

Our beer bottle analogy demonstrates that the air column in the bore has a natural tendency to set up resonances at specific frequencies.  Long bore notes [more total volume] have slower fundamental frequencies and short bore notes [less total volume] have higher frequencies.   Empty beer bottles resonate at lower frequencies than half-full bottles.  In the bassoon, resonances take the form of compression waves travelling back and forth from the reed to the open holes. Sound travels in compression waves – areas of high pressure followed in regular sequence by lower pressure areas [rarefaction].   At certain points of the bore, including the bocal tip, we have a regular alternation of compression and rarefaction.  Those alternating conditions happen at frequencies determined by the natural bore resonances for the length and volume of bore your fingers have chosen.  In order for these natural resonating frequencies to be sustained, energy has to be constantly supplied to the reed valve.   The reed converts your steady air delivery into pressure pulses, and these pulses match the specific frequency of those natural bore resonances.   So, if the bore resonance is A 220 Hz, the pressure inside the small end of the bore varies between compression and rarefaction 220 times a second, which triggers the reed valve to supply pressure pulses 220 times a second. We touched on this interaction in chapter 4 The Physicist’s Viewpoint.

Imagine the reed sitting at the front end of this process.

Its job is to convert steady blowing pressure into ‘pulses’ and those pulses have to be delivered at the rate of the fundamental resonance frequency of the note being fingered. 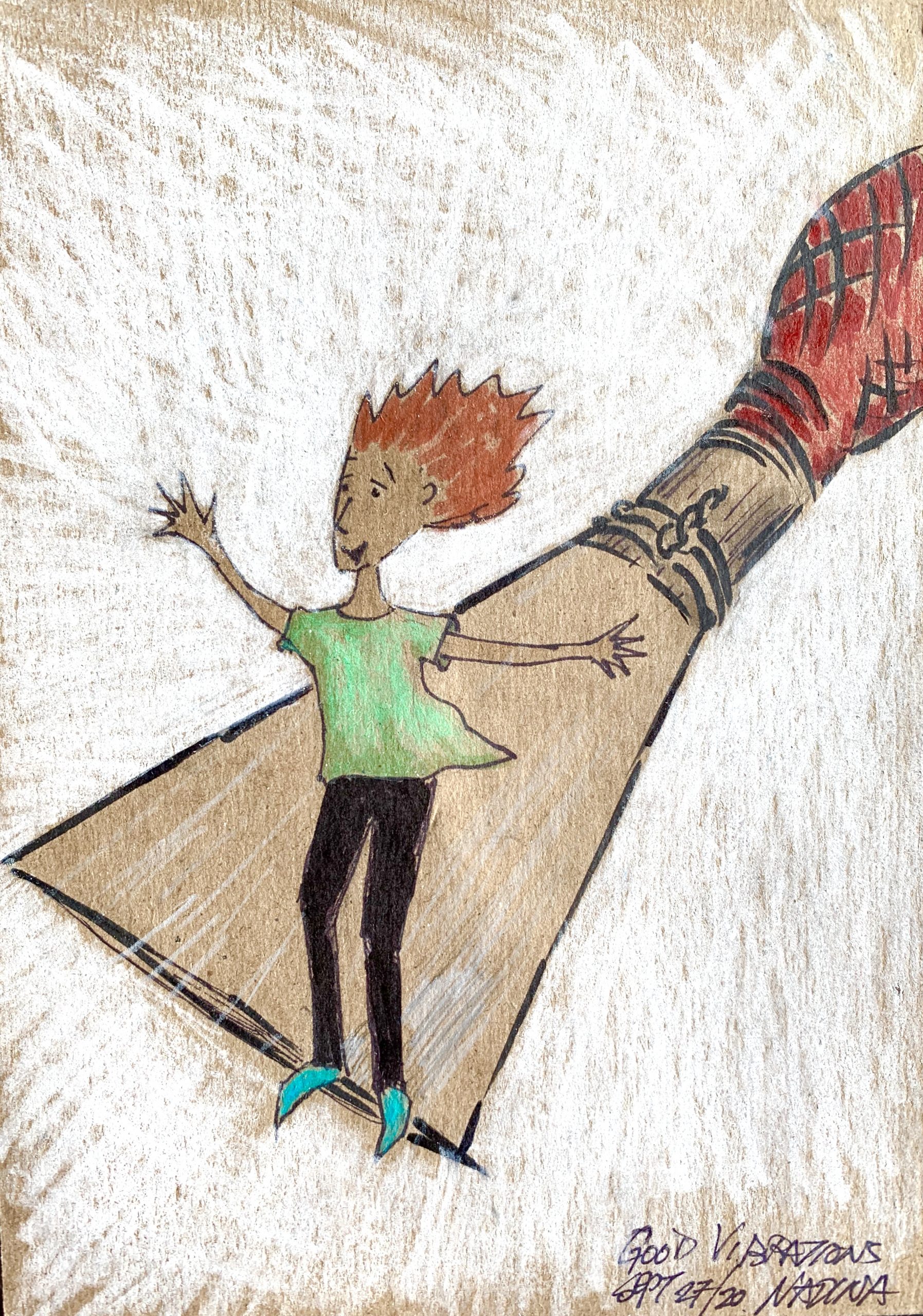 Let’s put this idea aside for a while and look at the basic physics of airflow from your mouth into the reed.  Stop and consider your physical relationship to the bassoon.  It involves your lungs blowing steadily through the two blades of the reed and your lips controlling both the aperture opening and the inherent tension of the cane.  Blowing air into the reed results in some sort of motion of the blades.

But how? It’s an interesting question.

What happens when you blow air into the aperture?  Does the reed close or open? Oddly, the answer may depend on whom you ask and how they classify the nature of this particular kind of pressure-controlled valve.  Surely, it opens and closes and opens and closes ad infinitum.  Does it matter what the initial physical response of the blades is?   You would think the introduction of blowing pressure would force the blades apart.  I believe the opposite occurs; the initial flow of air draws the two blades inward toward each other. Why?  Well, the double reed is a type of valve that closes in response to accelerated airflow.  This is due to the fact that pushing air thru a restricted passage increases its velocity, which reduces the pressure on the inside surfaces of the two blades.   That seems a bit counterintuitive, doesn’t it?  But you can easily get a picture of this process by holding two pieces of paper, bent to simulate the aperture of a bassoon reed.

Try blowing air thru this opening. 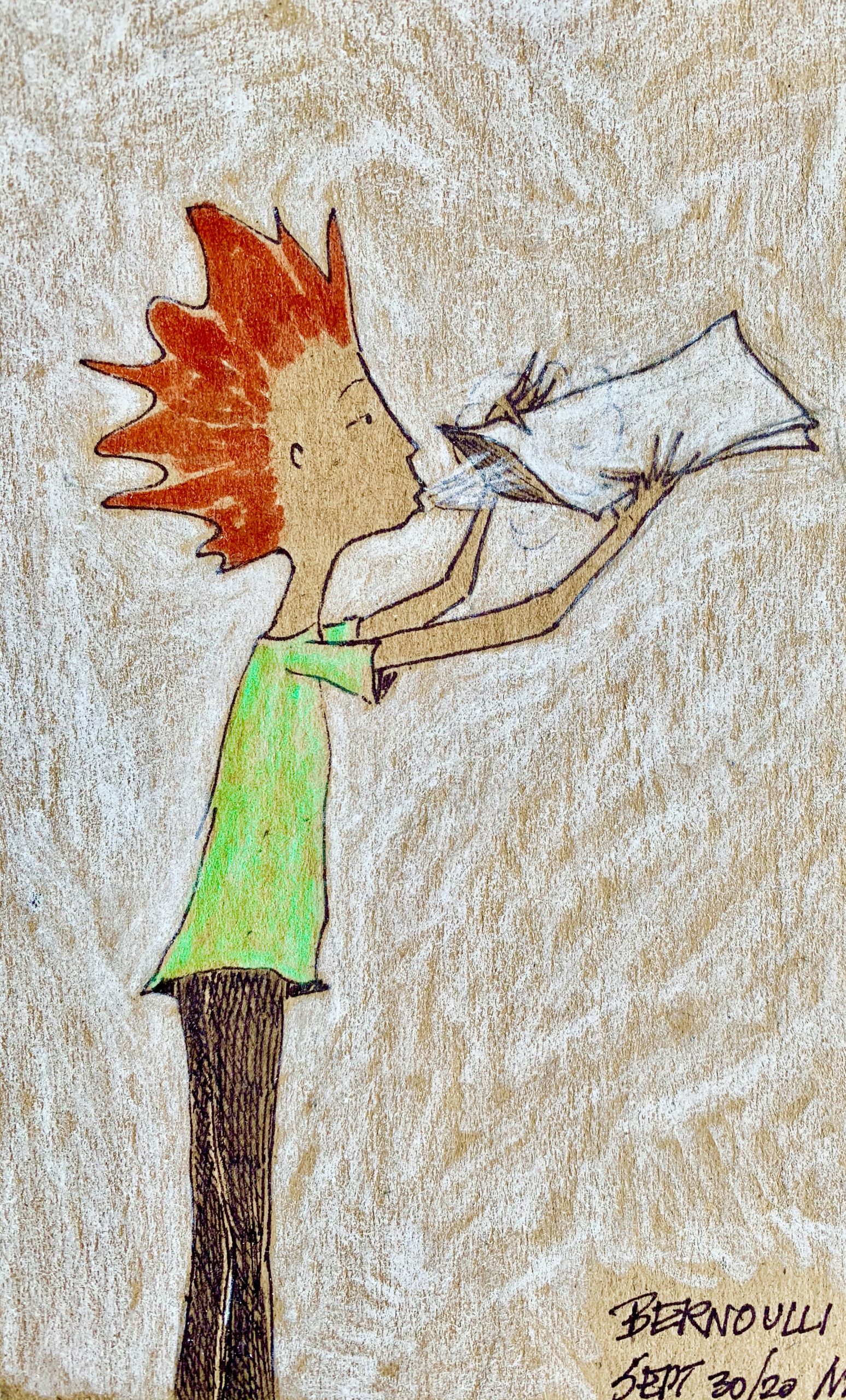 You’ll be surprised to find that the two pieces of paper quickly come together, despite the fact that you’re delivering a lot of air pressure 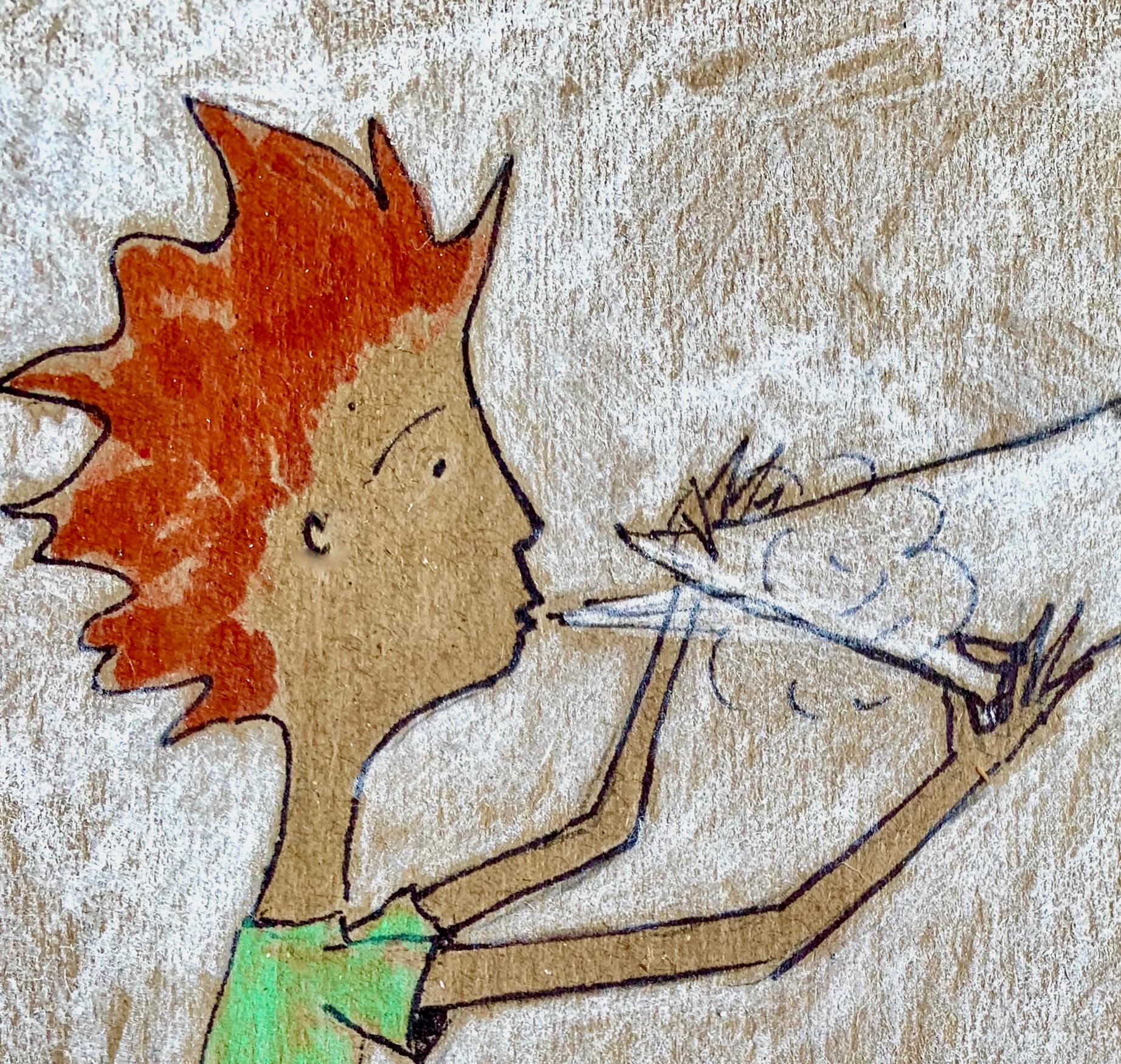 But remember, you’re not blowing directly AT a surface; you’re blowing BETWEEN two surfaces.  In 1738 the physicist Daniel Bernoulli observed this fact and came up with this important principle of fluid dynamics:

It states that for a non-viscous flow, an increase in the speed of the fluid occurs simultaneously with a decrease in pressure in the fluid’s potential energy.

Oh no, an equation…

Relax.  You don’t need to understand the math.  The two sheets of paper want to join each other because the pressure on their inside surfaces quickly becomes lower than the average atmospheric pressure on the outside surfaces.  You just need to understand that when air begins flowing into the reed aperture – and begins travelling into an ever-increasing bore diameter – it accelerates.   The measurable pressure on the inside surfaces of both top and bottom blades are quickly reduced.  The reed blades are ‘sucked’ together.   This is the ‘Bernoulli’ effect and a great deal of our intuitive understanding of reed design is based on this phenomenon.

In upcoming chapters, I’ll help you utilize this knowledge in improving your reed making skills. See you next week for Chapter 7!