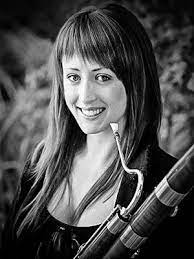 Born and raised in Saskatoon, Stephanie Unverricht moved back in 2011 to join the Saskatoon Symphony Orchestra as Principal Bassoonist. She began her studies on the bassoon with Peter Gravlin in Saskatoon and then continued at the University of Ottawa for her Bachelor of Music with Christopher Millard. She completed her Master of Music degree in Bassoon Performance at the New England Conservatory in Boston, studying with Richard Svoboda.
Stephanie performs around the city in various chamber groups, including Prairie Virtuosi and her trio “Chicks with Sticks”, and is also a multi-instrumental member of a semi-experimental alternative folk music band, Minor Matter. Stephanie maintains a private studio in Saskatoon and a few surrounding rural communities, including Humboldt and Middle Lake. 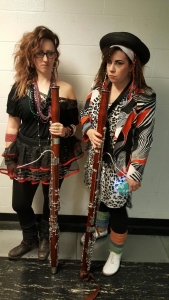 Every good bassoon section needs to dress up!

Marie received her Bachelor of Music degree from the University of Saskatchewan and is an alumnus of the National Youth Orchestra of Canada. She first performed with the Saskatoon Symphony Orchestra in 1991 and became a full-fledged member of the bassoon section in 1995. Marie has also performed professionally with the Regina Symphony Orchestra and the Winnipeg Symphony Orchestra, as well as with the Saskatoon Opera Association.
Marie maintains a private studio and is active locally as a freelance musician and clinician. She has been a sessional lecturer for the Department of Music, University of Saskatchewan since 2003.
Marie and husband Troy Linsley co-ordinate the Saskatchewan Band Association’s Saskatoon Summer Band Camps. Together, they have two brilliant young sons, Nathaniel and Samuel (a.k.a. ‘Trouble’ and ‘More Trouble’).